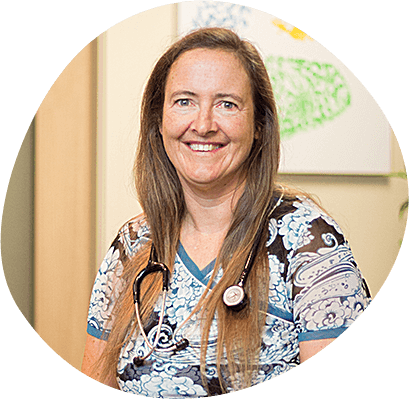 Not a day goes by at the office where I don't learn something interesting from a patient family, or get to be a special part in working towards good health for a child.

Dr. Fiona McConnell joined our practice in 2006. She attended Williams College for her undergraduate studies and State University of New York at Buffalo for medical school. She completed her residency at Denver Children’s Hospital. Before moving to Seattle, she worked at a private practice in Denver for eight years.

Growing up, Dr. McConnell thought she wanted to be a preschool teacher. After discovering a fascination with biology and physiology, she was drawn to the challenges and delights of pediatrics. She says, “Working as a pediatrician has been a humbling and rewarding privilege for me, second only to the challenges and rewards of being a mom.” Dr. McConnell also enjoys caring for international patients, having worked in a Vietnamese refugee camp in the Philippines, and at a children’s hospital in Tobasco, Mexico. Since 2008, she has worked as a consultant on an ethics board, reviewing scientific protocols that study new vaccines and treatments for children to evaluate scientific merit and whether there is adequate protection of study participants.

Dr. McConnell is married with two children, a son and a daughter. Her husband designs backpacks at REI and they love to field-test gear by going backpacking and kayak camping as a family. Dr. McConnell also enjoys spending time with her family, cross country and telemark skiing, swimming in Lake Washington, commuting to the office by bicycle, and playing the piano.